Just when I thought that the end of March, my birthday  was the absolute perfect time to hit Myrtle beach, destiny brought me in October. Yes it is quite torturous showing up on a somewhat sunny day to a pristine beach and not being to jump into a couple of waves, but we have been to the beach so many times in my life time, that I have really learned to appreciate the “off season”. The words “ghost town” come to mind. If ghost town in fact was at the ocean and laced with plastic palm tree’s and pictures of shells.
We stumbled across some “fall” rates for a ocean front resort called Sea Mist that was just an hour away from our concert venue in Charleston, and though it had some mixed review’s we decided we would take our chances, after all for what we were paying, it couldn’t be worse than a cheap hotel that had no ocean.  Since I am the worlds biggest fan of Jacuzzi’s, my honey thought he’s score a few boyfriend points and booked us one of the four Jacuzzi rooms, even though the resort did boast indoor heated pools and Jacuzzi ,but nothing is more awkward than sitting next to a 70 year old man in a speedo or teenagers making out, and who is to say how comfortable a Jacuzzi is if it’s outside in the freezing cold.
Oh Jacuzzi suite? I meant to say Romance Suite. That’s fine right?

Yes. That is our tub pictured above. Bow chika wow wow!  Yes, and  there was a mirror over our Miamie inspired 80’s decor bed set. We laughed so hard, it was almost worth it. Did I mention everyone kept  asking us did we just married. Yes, imagine the disappointment  of  the dear old lady at our buildings help desk when she realized we where living in sin. No lady, I just got a thing for hot-tubs . It’s ok, I drowned my guilt with the complementary  bottle of champagne.
We had a good laugh, but sadly, we had to switch room. Our floor smelled like burnt bacon, and the room smelled like they had cleaned it with spoiled bleach water… and the most ironic part? Well… our heart was broken. Literally. I filled her up and she wouldn’t come on. That ended up being a blessing however, because one floor down there was normal tub and a clean smelling room. They didn’t hook us up for our trouble, but they were at least nice about everything. Still…  a free ap or drink from the onsite restaurant would have been nice since we had to completely pack back up and move.
The Sea Mist was HUGE. I am not entirely sure we weren’t in another city, Seriously,it’s like 15 acres, and several buildings. We undoubtedly got the one of the best rooms in the lot, the view was amazing, and the huge room  had  a mini fridge, microwave, table and dish ware. There was a “movie theater”, arcade and a small gym… somewhere. There were a few things I didn’t like, the floor was all tile, which was cold and gave me constant “walmart feet”, and it was asked that you clean your dishes before you left but there was only a small sink in the bathroom… so yeah…we stuck to our sanitary disposables…eww!   While I can imagine this place is booming in the summer it was quite and I saw very few kids out and about. For an unbelievable  room we could have otherwise not afforded, we just cranked up the heat in the room and pretended.
We spent three days/ two nights at $55 a day which included a decent breakfast buffet, the champagne and access to all the buildings that where open. No surprise that things like the lazy river and out door patios where closed, but we found plenty to do including lounging at the pool and steam room.  Our second night we opted for the $12 oyster roast. This was great and awful all at the same time. The don’t quite let us know that the oyster roast is full of golfers that get this roast in there package. Our group were some  lady deprived Canadian’s that were making innuendo’s that they thought I didn’t get. It was liking listing to your grandpa bragging about mounting grandma in front of you and that is just something you just can’t erase from your mind. Eventually they calmed down, or either my Merlot kicked in….I wouldn’t say I would choose to do it again, but it certainly was an experience.
Halloween was the last night we stayed. It was a little sad that we didn’t dress up or go out, but that did not stop it from being one of the most memorable Halloween’s ever. We stopped at the nearby Piggly Wiggly, a wow, just wow. I never knew that Piggly Wiggly could be so glamorous. But with all these rich and famous golfers, it makes sense. We couldn’t afford the many many…did I mention many fabulous craft beers that they offered, but we did pick us up some crafty Hex by Magic Hat as well as some pretty uppity microwavable items for a romantic dinner for two.  As the sun began to set a magically bright still mostly full     moon came out. It was so orange and bright that it just completely captivated you. We sat on the beach, alone, until  we just couldn’t stop yawning and surrendered the night. Halloween at the beach a new tradition? Well, I hope say. It’s hard to give up birthday at the beach where I actually have a chance of getting in the ocean… but who knows… maybe we can work them both in! 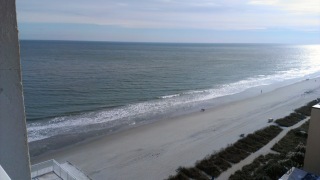 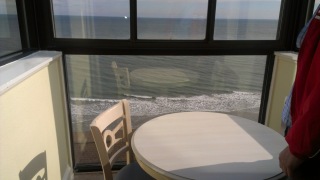 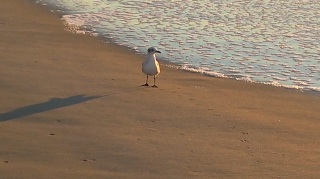 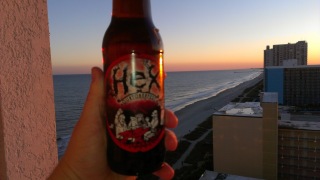